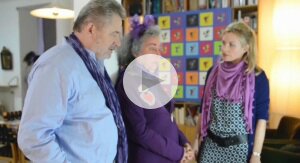 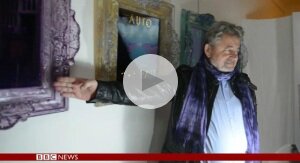 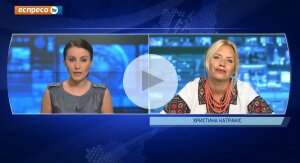 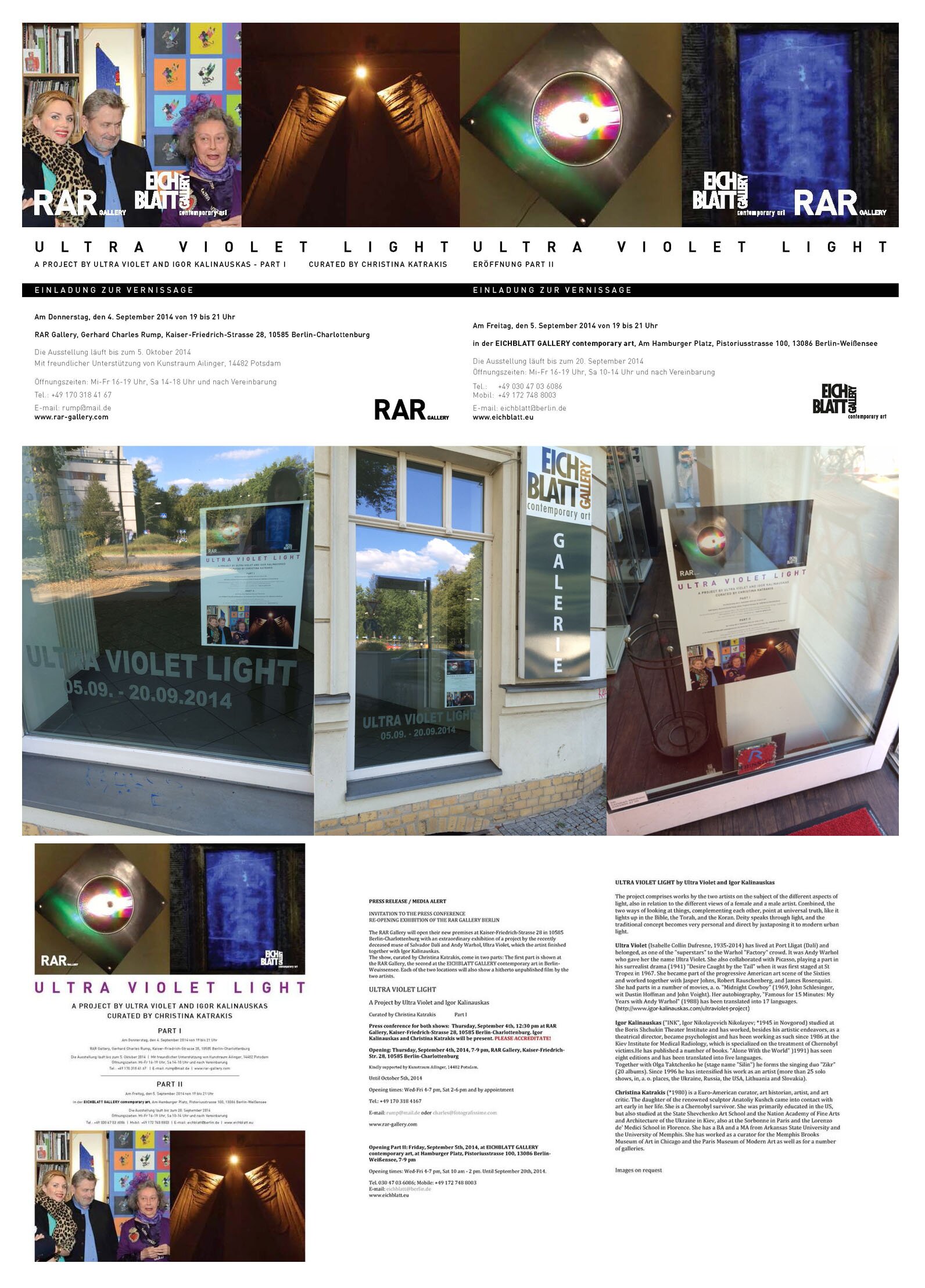 The "Ultra Violet Project" made it to Pankow(er)Leben Berlin art magazine and Art Berlin 2014 catalog. At the press conference:

Recently, in 2014, Igor Kalinauskas began a creative artistic collaboration with one of the stars on the contemporary international art scene, the muse of Salvador Dali and Andy Warhol, the star of Pablo Picasso’s play, an artist, an actress and a writer – Ultra Violet. 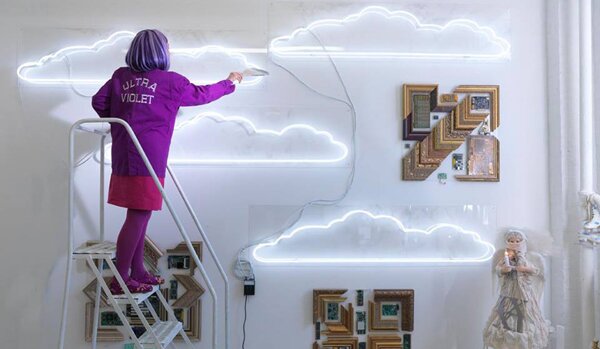 Their joined art project is titled “Ultra Violet Light” and comprises of the series of works related to the aspect of light itself, such as Kalinauskas’ burning spheres of light in “wondering stars” and “cosmic embryos”, and Ultra Violet’s neon light works and 9/11 sculptures. At the core of this creative collaboration is the concept not only of the “light” as the vital element, but the vision of light, as it is perceived by a woman artist versus a man artist. Two visions form the ideal Ing and Yang duo. Subsequently the viewer may behold both, the feminine vision, as well as the masculine, together they form a perfect harmonious union of light, the universal truth. Together the artists question and study the language of light, which was used by so many sacred texts be it Bible, Koran or Torah. Where the element of the universal truth be it God, Allah or Yahuah speaks through the light, in the image of light and via the light itself. It is also said that he is the light. Taking this ancient vision and concept, and placing it into the contemporary setting, juxtaposed against the mundane and real – makes it even more so innate, personal and immediate. A true form of post post-modernism in action, where bridges form between the ancient and the modern, the sacred and the benign, the myth and the reality, the faith and the immediate, the walls disappear and crumble, the mixture of visions, languages, philosophies collide into one whole – an explosion of light. 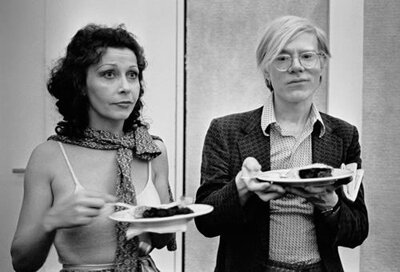 In order to understand the nature of the project, one has to understand and feel the people behind it. Who is this “muse of light” which inspired the greatest geniuses of our time - Dali, Picasso, later Warhol and now captured the heart and the mind of Kalinauskas? Who is the woman artist behind the veiled name of Ultra Violet?

Indeed, Ultra Violet is her stage name, born Isabelle Collin Dufresne, this incredible woman-artist is not only the legendary muse of Salvador Dali and superstar of ’s “The Factory” and films, but a true living history. She dwelled not only in the surrealist vision of Dali and in his studio in Port Ligat, Spain and New York, but also in the heart of the emerging at the time pop art scene, communicating and spending time with some of the founding fathers of the movement: Jasper Johns, Robert Rauschenberg, and James Rosenquist to name just a few. It was Salvador Dali who introduced Isabelle Dufresne to a rising star of the pop art movement – Andy Warhol. Soon after she moved into The Factory and became his leading superstar in numerous projects and films. It was Andy who granted her the stage name “Ultra Violet”, because it was her preferred color at the time, and even her hair was the color of lilac. Ever since, this pseudonim stayed with her.

She also took part in a creative project of another generous of the century – Pablo Picasso. In 1967 Ultra Violet played a part in his play Desire Caught by the Tail. it was set for the first time at the festival in Saint-Tropez, France, with such stars as Taylor Mead. But no, the list of Ultra Violet’s friends, acquaintances and partners doesn’t stop with such titans of the time as Dali, Picasso, Warhol, Jasper Johns, Rauschenberg, Rosenquist and Mead. She knew numerous historic personalities and celebrities of her time, rotating in their circles, exchanging ideas and vision with such stars as John Graham, John Chamberlain, Edward Ruscha, Rudolf Nureyev, Miloš Forman, Howard Hughes, Richard Nixon, Aristotle Onassis, Maria Callas, Marcel Duchamp, Man Ray, Marc Chagall, Bob Dylan, John Lennon, and Yoko Ono. 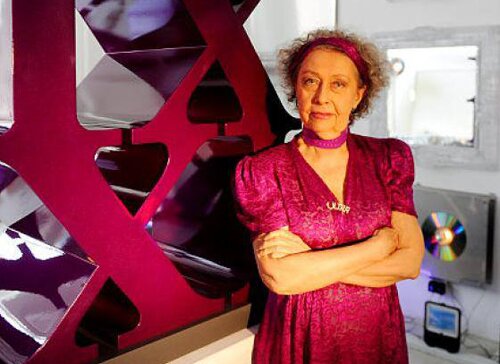 Ultra Violet - born Isabelle Collin Dufresne (born 6 September 1935, La Tronche, Grenoble, France) she is a French-American artist, author, and former colleague and superstar of Andy Warhol. Earlier in her career, she worked for and studied with surrealist artist Salvador Dalí. She lives and works in New York City, and also has a studio in Nice, France. 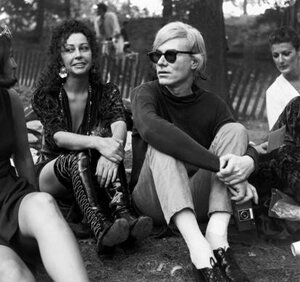 Isabelle Collin Dufresne was brought up in a strictly religious upper-middle-class family, but she rebelled at an early age. She was instructed at a Catholic school, and then a reform school. In 1953, she received a BA in Art at Le Sacre Coeur in Grenoble, France. She soon left France to live with an older sister in New York City.

In 1954, after a meeting with Salvador Dalí, she became his "muse”, pupil, and studio assistant in both Port Lligat, Spain, and in New York City. Later, she would recall, "I realized that I was 'surreal', which I never knew until I met Dalí". In the 1960s, Dufresne began to follow the progressive American Pop Art scene including Jasper Johns, Robert Rauschenberg, and James Rosenquist.

In 1963, Dalí introduced Dufresne to Andy Warhol, and soon she moved into the orbit of his unorthodox studio, "The Factory". In 1964 she selected the stage name "Ultra Violet" at Warhol's suggestion, because it was her preferred fashion—her hair color at the time was often violet or lilac. She became one of many "superstars" in Warhol's Factory, and played multiple roles in over a dozen films between 1965 and 1974.

In 1967 Ultra Violet played a part in the surrealistic play Desire Caught by the Tail by Pablo Picasso when it was set for the first time in France at a festival in Saint-Tropez, among others with Taylor Mead. 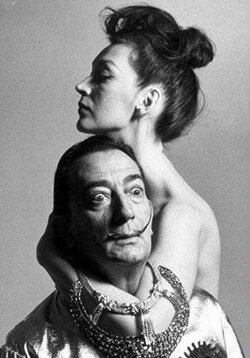 In 1969, she was "dethroned" as Warhol's primary muse by Viva, a more recent discovery.

Although a full participant in activities at the Factory, she generally avoided the heavy drug usage prevalent at the time, saying that her body reacted badly to drugs. She had tried smoking as a rebellious teen, had gotten very sick as a result, and resolved to abstain from drug usage. She would later observe, "If I had lived like all those young people, I would be dead today".

In the 1980s she gradually drifted away from the Factory scene, taking a lower profile and working independently on her own art. In her autobiography, published the year after Warhol's unexpected demise in 1987, she chronicled the activities of many Warhol superstars, including several untimely deaths during and after the Factory years.

In 1988, Ultra Violet published her autobiography, Famous for 15 Minutes: My Years with Andy Warhol. This autobiography was edited extensively and partially translated from French to English by her New York penthouse roommate Natalie Durkee. After a review of the book in the New York Times, it was published worldwide, eventually in 17 languages. After a book tour, she returned to France; in 1990 she opened a studio in Nice and wrote another book detailing her own ideas about art, L'Ultratique. She lives and works as an artist in New York City, and also maintains a studio in Nice.

On April 10, 2005 she joined a panel discussion "Reminiscences of Dalí: A Conversation with Friends of the Artist" as part of a symposium "The Dalí Renaissance" for a major retrospective show at the Philadelphia Museum of Art. Her conversation with another former Dalí protégée, French singer/actress Amanda Lear, is recorded in the 236-page exhibition catalog, The Dalí Renaissance: New Perspectives on His Life and Art after 1940. 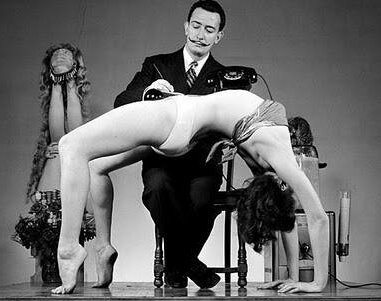 In 2006, she had a solo show at Stefan Stux Gallery in the Chelsea district of New York. In 2007 she gave a retrospective lecture at the New York Institute of Technology.

In 2011, she was featured in a brief article about surviving former Warhol "Superstars". Regarding her famous past and her artwork today, she has said, “People always want to know about the past, but I’m much more interested in tomorrow". In 2011, she showed a series of artworks as her personal memorial of the September 11 attacks, which were displayed in the exhibit Memorial IX XI at Queensborough Community College, opening on Friday, September 9.

In a 2012 interview, she said, "I’m a New Yorker, I’m an American, and I’m an artist. Because of those three things, I had to do something about 9/11, and the question was what to do, which is not simple".

In 1973, a near-death experience launched Ultra Violet on a spiritual quest, culminating in her baptism in 1981. Since then, she has been a practicing member of The Church of Jesus Christ of Latter-day Saints. 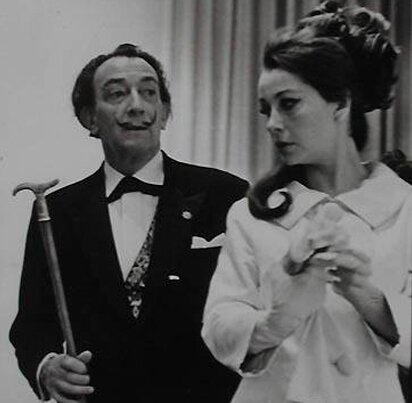 Working together with Ultra Violet on the joined art project "Ultraviolet Light" in her art studio in Nice, France: