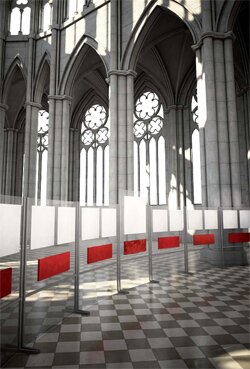 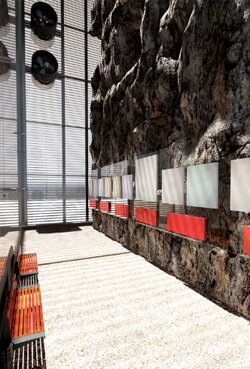 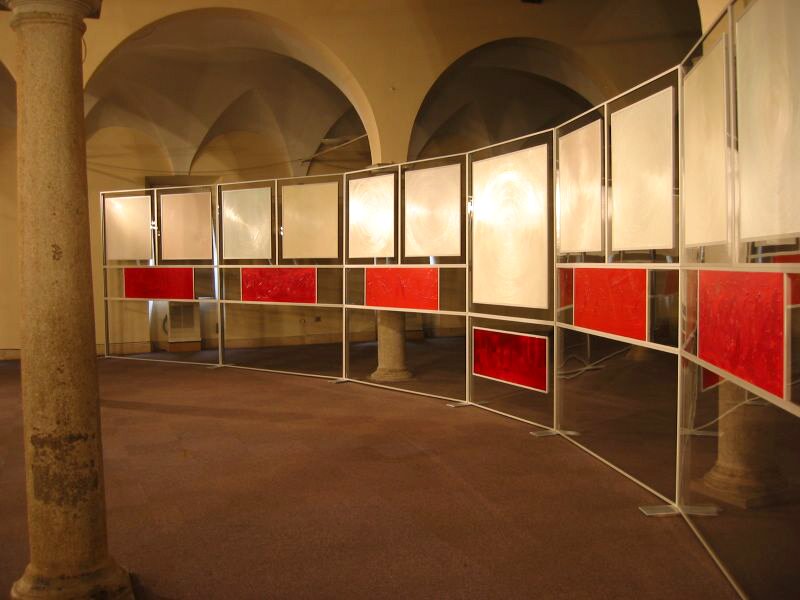 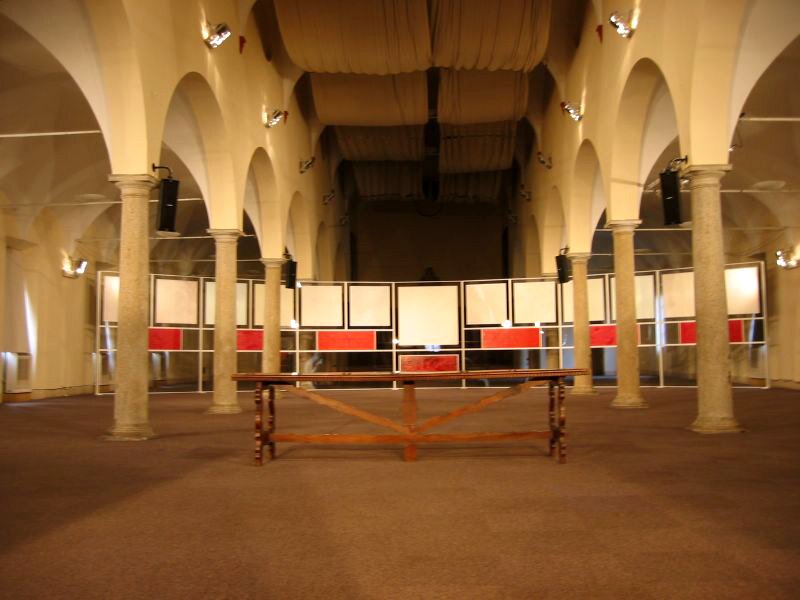 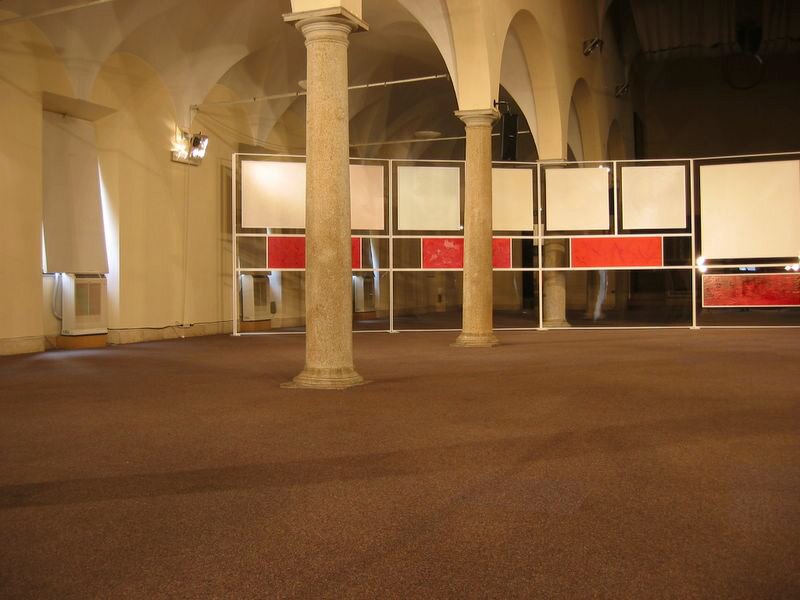 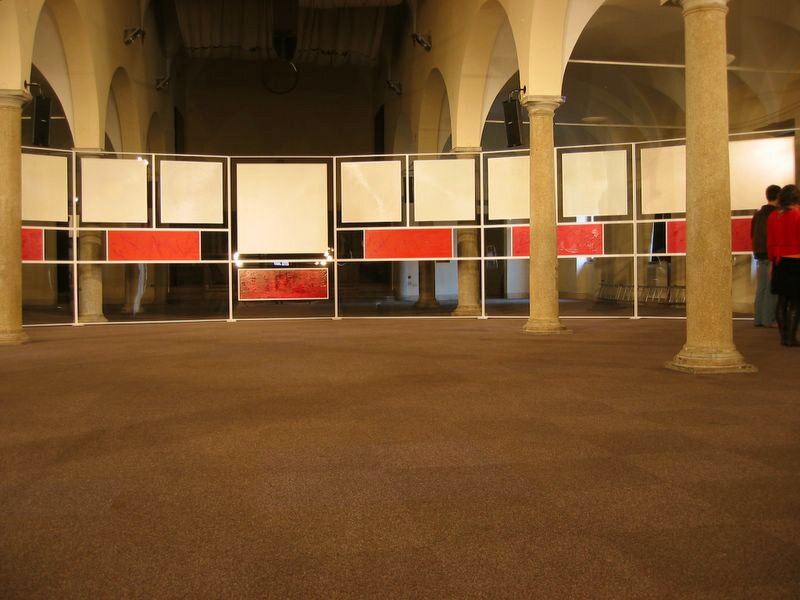 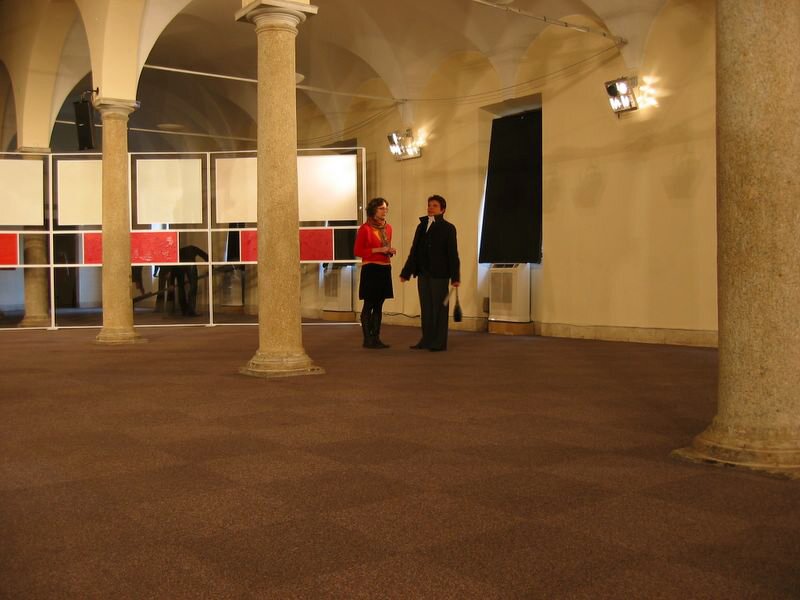 The Impression of "the Last Supper" by Leonardo Da Vinci: Spirit, Flesh, Blood

At the cost of blood of God-Man we join to eternity. Time stops, and the space turns white - the symbolic colour of otherness. The Last Supper is conveyed here as restoring the integrity of human life. In Christ Man partakes of the Holy Spirit through eating the Flesh and drinking the Blood of Man-God. The Passions of Christ are preceded by the Last Supper when the disciples share their Teacher's integrity of life. "This is my body", says Jesus Christ wishing to give away Himself and His life to the others entirely.

According to the artist's conception, this series of paintings looks like faces of the Apostles and Christ. But after 2000 years, their faces blurred, and there was only light which the artist depicted.

The Russian religious philosophers Khomyakov and Florentsky identify the Russian word "body" ("telo") with the word "whole" ("tseloe"), delivering its etymology from the Sanskrit root "tal" or "til" which convey the idea of health and strength through the ancient understanding of integrity. Even more clearly the semantics of the "body" as a whole finds itself in the Belarusian word "body" ("tsela"). Thus in this sense "body" is understood as "whole", "integral" (compare the Greek "soma" and Latin "individuum" and "corpus").

"...For this is my blood of the covenant, which is poured out for many for forgiveness of sins". The words of Christ are to be understood in the Biblical context, where the blood is identical with life.

Igor Kalinauskas is a man accustomed to personal power. His short, grey beard and his gift of complete, intense focus add up to a weighty presence. He is animated, his face intelligent, mobile and engaging. His energy, when it’s needed, comes on like a turbine. He makes a point by leaning close to conjure an intimacy, or by gesturing with his hands, quite large hands, to make an emphasis.

2000 years have passed. Faces faded, but the light remained. Impression of The Last Supper by Leonardo da Vinci.

The large-scale installation, which includes a series of canvas and sculptures that display the evolvement of the biblical scene in the inner space, is the author’s interpretation of the famous The Last Supper by Leonardo da Vinci.

According to the artist’s intent, the series of canvas represent the faces of apostles and Christ at the moment of the biblical scene of The Last Supper. In fact, over 2000 years their faces have faded, and only the light remained, which the author depicted.

At present, the viewer is joining in the atmosphere of the event that took place 2000 years ago. We see the light of the apostles, the table of The Last Supper, the printed words “One of you will betray me”, which Jesus Christ said at The Last Supper, as well as a protected artefact - the Holy Grail, and Angels on the watch. In the background you will be able to hear the music of a vocal duet, in which the Artist himself performs as a musician.

Igor Kalinauskas, the author of the project, artist, musician, psychologist and philosopher: 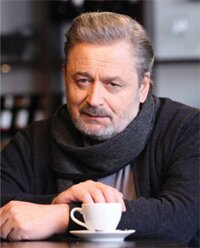 “With this project I’ve said exactly everything on this subject. Indeed (2000 years have passed from the times of the biblical scene), the light remained. And this light is inside us.

When Jesus was saying, ‘You yourselves are God’s temple ‘, he was implying that we know next to nothing about ourselves. We’re afraid of the great person inside us, because they are not used. Jesus Christ’s exploit is in the introduction of a completely new relationship. He said, ‘So you are no longer a slave, but a son; and since you are a son, God has made you also a heir’, we are ‘dearly loved children’ of God. He brought love to the world. He brought love of the man to God and love of God to the man. Love instead of fear. And he didn’t find any other way to establish this, but to accept death. And at this exact moment, his enemy Caiaphas understood his own fiasco... 2000 years have passed, but we’re still being intimidated. This is an absolutely non-Christian way.

We, people, possess tremendous inner resources, but we’re not acquainted with them. I underwent a lot of practices as psychologist and in my books I put the methods that can be useful for a certain person. The Akashic Records, the noosphere of the Earth, the informational centre of the universe - everything the ancients were talking about - it all exists, but in our subjectivity.”

“During the exposition in Kyiv Municipal Art Gallery “Lavra” over 1000 people have visited the project. And each of the visitors found something for themselves. Some empathized with the apostles, some prayed and some received the answers to their questions in this unique place. Some got rid of weight in their souls by empathising with Christ and some forgave and let go of the past by empathising with Judah. Some were puzzled and some were filled with indignation. But there invariably was response.

Fellow artists appreciated Igor Kalinauskas’ project, appraising the large scale and profoundness of the exposition that accentuated the importance and uniqueness of the artist’s skills as a creator, which was brought up during the discussion at the installation closing ceremony in Kiev.

The leading opinion-shaping art critics were astonished by incredibility of project - from intent to realization of the project that changed the inner space of, per se, underground art gallery “Lavra”. However, the event of this sort is not mainstream in contemporary art, which tends to trigger shock and surprise, instead of empathy or subjective association with it.

Nevertheless, the most important is that the visitors understood that there is a kind of contemporary art that can be emotionally joined in, that can be empathised. Indeed, that is a cultural event of large scale.” 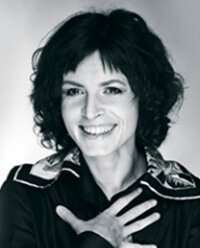 “The impression from Leonardo da Vinci masterpiece “The Last Supper”, which was created more than 500 years ago, became the main theme of Igor Kalinauskas’ project 2000 years have passed. Faces faded, but the light remained. Leonardo da Vinci’s fresco refers to the events even more remote in time. However, Igor Kalinauskas’ installation, based on the biblical scene and the ancient fresco, reflects the vague, but not the least important needs of people nowadays.

Not long ago it used to seem that following the way of technical progress you can solve all the problems of mankind and answer all its demands. Today it becomes obvious that it’s not true - the necessity of a spiritual purpose that goes beyond the frame of consumer society philosophy is more evident. This pursuit is difficult, especially since a lot of official religious institutions stopped being relevant to a certain extent. This is where the art offers its unique path, the space for the research of new meanings: the practice of an inner dialogue with one’s spiritual source and an attempt to give one’s own answer to global questions.

This path requires not only the utmost concentration, but also the research of some new ways of expression from the artist, which liberation and freedom from the canons of classical art can help with. It just so happens that Igor Kalinauskas has never been bound by them. By his own confession, Kalinauskas is not a professional artist, as he deliberately refused to study classical art. He has been pursuing, “creating” his own technique in art instead. Undoubtedly, this freedom and his own art style helped him in this project’s creation. It’s not a mere coincidence that one of the main trends of unprofessional visionary art in the world is the religious theme, which can be interpreted in many ways. Nevertheless, the series of canvas are only a part of this project. Igor Kalinauskas admits contentedly that only in Kiev his project was implemented fully, for the first time exactly according to the artist’s intent. There was a pictorial polyptych altar in the end of hall and pillars in the shape of angels that protected the improvised nave. To finish with, an enormous white table in the centre was summoned to “bring closer” the biblical scene, gave a feeling of this day and age in the happening. The music in the background – improvised vocal meditative practice by Duo Zikr (Igor Kalinauskas and Olga Tkachenko) – was playing a significant role. The artist offered a finished synthetic space – basically, a kind of a temple. However, the project brings up another serious aspect. In this improvised “temple” the artwork becomes the icon. The rotations of the “Christ’s blood” and the spiritual portraits of apostles are gathered into a majestic iconostasis – the installation reinforces Leonardo’s artwork as an object of worship. Igor Kalinauskas has been nurturing the idea of this project and he has had a great amount of plans and ways of its realization. One of the most radical plans comprised the building of a special pavilion at one of the city dumps. A part of the project would be the distribution of bread and milk to the bums (inevitable visitors of such a location) at the exit of the pavilion. One could say it’s a sort of communion with art. Can the beauty save the world once again, in Kalinauskas’ viewpoint?”

“God returned to the culture, and this is a colossal event. During the three visits of this space i’ve experienced more inner events than ever before in my life. Leonardo da Vinci, Jesus and the apostles became real people to me. I welcome returning of life in the art.” 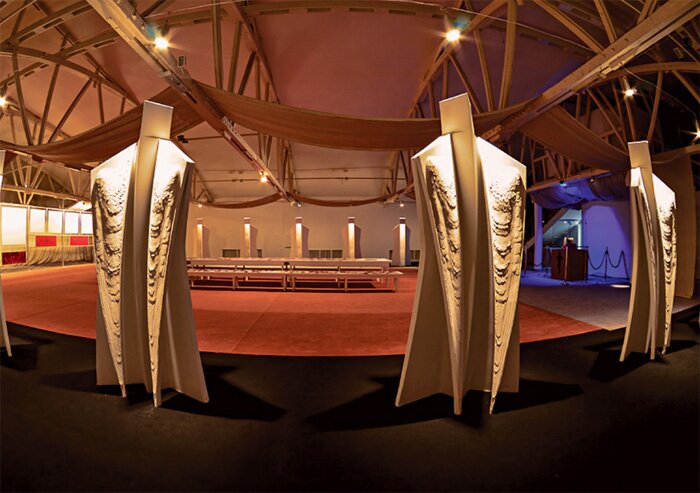 “I was face-to-face with the work of art and felt that all my senses are being activated, and this is the only work among Arsenale (international Kiev biennale, that was held at the same time as Igor Kalinauskas’ exhibition in Kiev, which, by the way, was not a part of biennale) that had this astonishing influence. It’s as if I entered the painting. Thank you for the highest level of contemporary art.”

“This work is completely different from everything that we are used to see at the exhibitions, so as not only image and sound are used, but also the space itself is engaging the viewer into the scene. Indeed, this is a unique event even as far as for Europe.”

“You are the first artist that transformed the space of this gallery this much. The art’s function is to change the world around. There’s a great amount of garbage and decline in contemporary art. However, there is a trend that does not fit in the general conception - visionary art. It existed at all times. And this is what I call true art - artist’s communication of his own perception of the world. Not so long ago, the economic crisis showed the failure of rational thinking and made us meditate on a lot of things. I consider your works as a striking example of visionary art that makes people think and empathize with what they see.”

“In the beginning of last century Wagner started to elaborate the theory of the unity of arts. And from that time on, many artists have tried to accomplish perfection, universal art that could combine all the arts. At avant-garde times great innovators left us their works with spaces that united by action. Today I was present at this amazing synthetic act, where Igor Kalinauskas, as a stage director, a musician and an artist, united all types of art: music, painting, directing, sculpture, performance and a book. This event, astonishing in its perfection, is very important both for Ukrainian and European cultural life.” 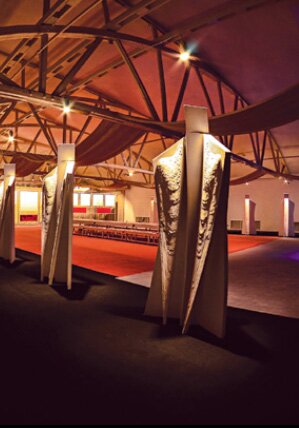 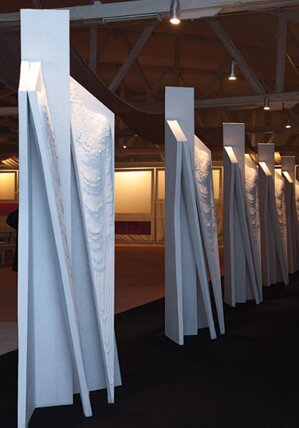 Exhibitions of "The Last Supper" Project: 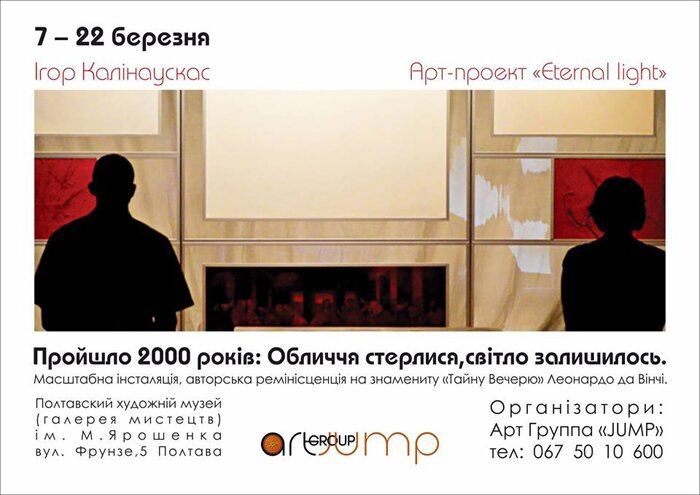 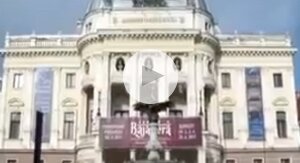 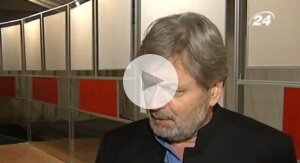